What are the differences of OHV vs SOHC vs DOHC? 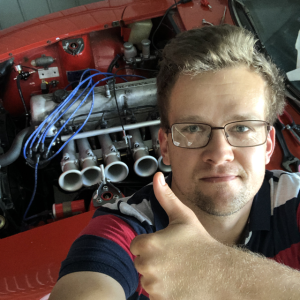 There are three types of valve-train used in petrol engines and all three are still produced new. This a guide we’re going to discuss OHV vs SOHC vs DOHC, the good the bad and the ugly of each. I’ve been lucky enough to own and fiddle with variants of all three. Bear in mind this is a generally overview and there will always be examples that push the limits or are highly efficient.

OHV engines use an embedded cam close to the crank either chain or gear driven. Pushrods are used to push on the valve rocker and activate the valve. Oiling is simpler. Camshaft properties are physically fixed and cannot changed as all lobes are on the one piece.

Two valves per cylinder are used and Valves are normally near vertical because of the valve train geometry. This gives good opportunity for higher lift camshafts and high torque production in the low RPM range. OHV engines are normally compact and associated with V motors, particularly V8.

cheap to make and reliable. Also relatively cheap to modify. An example is my 1XN used pressed metal rockers and also used hollow pushrods and hydraulic lifters to circulate oil to the top of the head.

Redline limitations from pushrods and valvetrain masses particularly from the larger valves causing valve float at higher RPM. The spark plug normally located to the side which is not optimum. However due to the valve arrangement good shape high compression chambers can be produced.

It is generally difficult to implement any variable timing control measures on an OHV vs SOHC vs DOHC motors.

Camshaft is located overhead and driven by chain or belt from the crankshaft. Valves are operated by rockers allowing for better valve geometry promoting flow at higher RPM. Normally taller than OHV engines. Camshaft properties are physically fixed as all lobes are on the same stick same as OHV.

Sufficient space and orientation to locate 2, 3 and 4 valves. Spark plug is normally located to the sides like OHV. Fuel efficiency is improved. This gives opportunity for longer duration and higher lift cams. SOHC can be cheapest to manufacture out of the three if designed well. Difficult to implement variable camshaft timing technology but is possible.

This arrangement has two camshafts located over the head and seperate to each other. One cam for intake the other for exhaust. Cams can be driven by chain or belt from the crankshaft.

Normally 4 valves but there are examples of 5 valves (the 20V 4AGE springs to mind). high RPM flow and fuel efficiency are the best out of the three types. Having seperate camshafts allows the more efficient valve orientation to promote flow. However this creates difficulty achieving good high compression combustion chamber shapes. Pistons are normally domed producing high squish areas not ideal to mitigate knock or detonation.

DOHC engines are normally low torque and high peak hp and RPM out of the three. Because of this and the optimum fuel efficiency today you seen many more small capacity highly efficient engines on the market.

DOHC is the most costly to manufacture and to modify. However gives the most tuning freedom. By that I mean, you can adjust one camshaft to the other making engine behave differently.

The VTEC and camshaft assembly on an old AP1 S2000 I had was taller than the head itself. That system was very clever. I had to replace valve stem seals on that motor, part of VTEC life apparently! See below.

Be sure to check out other tech discussions on my podcast Mod Tune Win Repeat: iTunes | Spotify

Like your Datsun 240Zs? Well check out my L28 stroker build: https://builtonpurpose.co/diy-guides/l28-stroker/

2 replies on “What are the differences of OHV vs SOHC vs DOHC?”

It seems many of your generalizations have more to do with valve number and arrangement (combustion chamber shape) than valve actuation. Wedge or bathtub chambers versus hemispherical chambers. A single overhead cam engine doesn’t need rockers (Fiat engines designed by Lampredi), and it can have bathtub, wedge or hemi combustion chambers, all equally common. As soon as you have four valves at lower included angles, you have a modern engine with a near perfect combustion chamber that can be designed to give whatever power characteristics you want while operating at the highest efficiency. The four valves provide breathing even with mild cam timing that gives a broad spread of power – torque at lower rpm and power at higher rpm. As you know, horsepower is just the linear function of torque times rpm. The engine characteristics are defined by the torque curve. Every value of horsepower at a given rpm is taken directly from the torque curve. You might consider this when you look at the dyno curves your Z generated before and after “tuning.” They appear to be identical in shape, with the torque and horsepower peaks appearing at the same engine speeds. The humps and dips of the torque curve also appear identical. You should probably ask yourself “How did this engine make 15% more power if the torque curve shape did not change?” Or, you could believe that your “tuning” resulted in perfectly distributed gains of 15% across the board. Thanks for all the good Z engine experiments.

If you take a large enough sample of OHV, SOHC and DOHC engine. Break down torque and power curves to a per unit ratio, you will see OHV and some SOHC engines produce more torque at low RPM. The popular theory is that the larger sized valves associated with 2 valve engines causes turbulent eddies at lower RPM resulting in a more homogeneous air fuel mix. I believe there are a couple of white papers available on this theory.

PrevPreviousForged vs cast pistons, what is the difference?
NextEFI fuel pressure regulator explainedNext
On Key

How to determine spark plug heat range and why is it important? I’m glad you asked!  It gets hot inside an engine right?  How hot

These days injector behaviour at different voltages is well understood. The speed of opening and amount of fuel delivered vary with voltage. Corrections are made in fuelling calculations to account different performance for differnt voltages at the injector. If what the Megasquirt ECU understands is the voltage at the injector is different in reality, then it is likely fuelling calculations will be incorrect. This is why the battery voltage calibration needs to be correct in your Megasquirt ECU.

From time to time some recommendations and products will contain affiliate links.

This means if you make a purchase from this link I recieve a small commission at no cost to you.

If you want to stay up to date with new information on the site, considering subscribing to the newsletter using the form below.